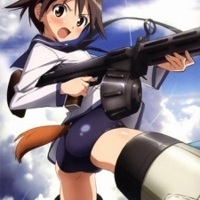 When an alien force eventually called the “Neuroi” attacks Earth around the 1940s, the world is devastated by destruction. However, one man is able to lead the invention of an anti-Neuroi weapon known as the “Striker unit” which augments magical power and also enables flight through two mechanical lower-leg coverings known as a sort of witches “broom.” Young witches from around the world are gathered together to fight back in a force known as Strike Witches. The inventor, however, was thought to have been killed during service. The daughter of the inventor leads a relatively normal life except for her untrained and incredible magical power which she hopes to use one day in healing. However, she is suddenly whisked away on a search to see if her father is actually alive. She encounters his invention and the possibility of perhaps using it herself.