Pokémon: Giratina and the Sky Warrior 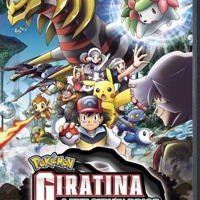 When dark, poisonous clouds begin to appear in the Reverse World, home to Giratina, it takes matters into its own hands and pursues the cause of the clouds: Dialga and Palkia. Finding Dialga, it lures it for revenge, and assumes Shaymin to also be responsible. But this is not the only trouble: a researcher who wishes to make Giratina’s power his own is also in pursuit of the Renegade Pokémon. With the balance of the Pokémon world and Reverse World altering due to Dialga and Giratina’s own fight, Ash and friends must stop the fighting and get Shaymin to Gracidea to participate in the flower bearing ceremony.