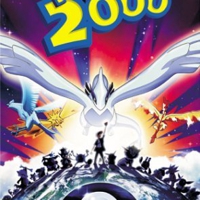 A Pokémon Collector, Lawrence III, wishes to capture the three legendary birds and follow the legend’s tale. This is all part of his plan to capture the Beast of the Sea, Lugia. Using a futuristic aircraft, he captures Moltres from Fire Island. As predicted, the world’s climate and weather begin to go awry, alerting the attention of many Pokémon and humans, including Professor Oak. Along with Professor Ivy – who leaves Brock in charge of her Pokémon – and Delia Ketchum, she travels out to the Orange Islands in a helicopter.

Out in the Orange Islands, Ash Ketchum, Misty, Tracey are on a boat piloted by Maren. It’s a sunny day. They decide to let all their Pokémon out. What they don’t know is that Team Rocket is following them, but don’t worry. Later, a storm heats up, striking both ships and Maren’s boat is washed ashore onto Shamouti Island, the centerpiece of the Orange Islands while Team Rocket’s crashes into a rock. The weather is bad back in Pallet Town, too, because Pidgeys and a bunch of Diglett run towards the Orange Islands, along with Professor Oak and Delia Ketchum. Back on Shamouti Island, Ash, Misty and Tracey are welcomed by the festive islanders
Melody with Ash, Misty, and Pikachu at the festival.who are celebrating the legend. One woman, Carol, is old friends with Maren and was the former Festival Maiden. Now the role has now been passed down to her younger sister, Melody, who takes a liking to Ash. Ash is declared the Chosen One for the festival (allegedly, this happens annually to the first Pokémon Trainer to arrive) and is given the task of traveling to the islands of the birds and collecting three glass balls that represent the elements, before bringing them back to the island’s shrine where Melody will play a song on a special instrument to end the task. Pikachu, who is rather edgy, heads out to Fire Island, Ash and Maren following.