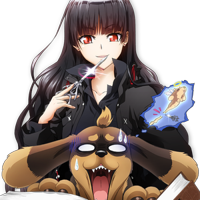 Dog and Scissors centers around Kazuhito Harumi, a high school boy who is obsessed with reading books. One day, while reading in a cafe, he is shot and killed when he attempts to protect a random stranger. As he is determined to read his favorite author’s unreleased last work, he gets a second chance and is reincarnated as a dachshund dog.

As a dog he is adopted by Kirihime Natsuno, the very person he tried to save, as well as the only person who can understand him in his new form. Kazuhito then discovers that she is not only his favorite novelist, but also a sadist who enjoys terrorizing him with scissors.