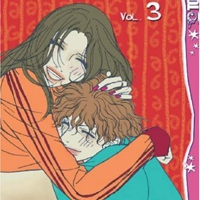 Sumire Iwaya (?? ??), a journalist at a major newspaper, is a career woman in a society that does not handle successful women well. Sumire suffers from depression and anxiety. She also has hobbies that are very un-feminine, such as smoking, being a fan of pro wrestling, K-1, and sh?nen anime.

After her fianceé leaves her for his mistress and Sumire is demoted at work, she stumbles across a young injured homeless man in a box outside her condominium. She takes him in and becomes attached to him. As a joke, she says she wants to keep him as a pet. To her surprise, the young man agrees. She names him Momo (???), after her beloved dog from childhood. Sumire provides room and board, and Momo provides unconditional love and loyalty. Sumire says there is no sex in their relationship, and she will only sleep with men who have the “three highs”: higher pay, higher education and higher height (i.e. taller than her 170 cm.) Despite this, there is definite sexual tension in their relationship.

Sumire later learns that Momo’s real name is Takeshi Gouda (?? ?? G?da Takeshi?), and that he is a dance prodigy who studied classical ballet but was too short to take the lead roles.