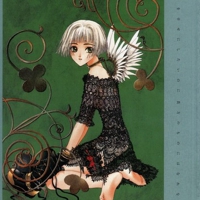 Clover is primarily about a young girl called Sue, whose name was stated to be derived from the Chinese word for four (sì) since she is a “4-leaf Clover”. In the futuristic world that she inhabits, the military conducted a search for gifted children nicknamed “Clovers”, who seemingly have the magical ability to manipulate technology. Demonstrations of their powers include teleportation and summoning weapons from thin air.
Classified according to how powerful they are, the children were then tattooed with a symbol of the Clover Project, with the number of leaves on the Clover indicating their power. To date, Sue is the only “4-leaf Clover” discovered. Along with other “Clovers”, Sue was imprisoned to prevent her contact with other humans, as the government feared that she might develop feelings and be used as a weapon to jeopardize the country’s national security.
Being isolated from the rest of mankind, Sue craves for company, and as for her only wish, she asks to visit “Fairy Park.” Her escort is Kazuhiko, an ex-military soldier who has been forced to undertake the task. It is later revealed that Kazuhiko and Sue are connected through Kazuhiko’s deceased lover, Ora.