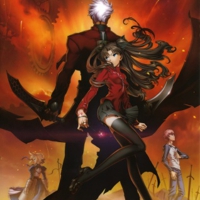 Based on an original concept by the original author Akira Toriyama, the story, set shortly after the defeat of Majin Buu, pits Son Goku and his friends against a new, powerful enemy.

This is the adaptation of the 2nd route of the popular visual novel: Fate/Stay Night. In this route, Tohsaka Rin will be the major female character. Revelations about Shirou and his destiny will be made.-Via MyAnimeList.net