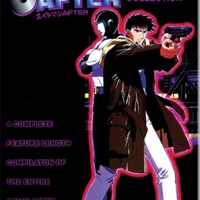 Murdered by criminals, Detective Yokoda’s body is retrieved by Professor Tani and taken to his laboratory. There, Tani performs an experiment that has failed seven times; Yokoda is the latest subject to have his life force transferred into an android body. For the first time, the experiment succeeds. Yokoda is reborn as the armor-skinned android 8 Man, able to dash at impossible speeds, as well as shape-shift into other people. He shifts himself into Yokoda, this time christening himself as “Hachiro Azuma”. He keeps this identity a secret, known only to Tani and his police boss Chief Tanaka. Even his girlfriend Sachiko and friend Ichiro do not know he is an android. As 8-Man, Hachiro fights crime (even bringing his murderers to justice). He smoked “energy” cigarettes, to rejuvenate his powers, that he carried in a cigarette case on his belt.
In Japan, the character’s origin actually varies significantly between the original manga, the TV series, and the live-action movie. In the original Japanese manga and TV series, the character’s name does not change when he is reborn as 8 Man. The “Detective Yokoda” name was created for the live action version. In the manga, Detective Azuma is trapped in a warehouse and gunned down while the TV series has him killed when he is run over by a car. Also, in the Japanese story, the character is called “8 Man” because he is considered an extra member of the Japanese police force. There are seven regular police precincts and 8 Man is treated an unofficial eighth precinct all to himself.
The Japanese manga was presented as serial novella stories along with a set of one-shot stories. Many of the stories were edited down and adapted for the TV series but not all of them. The novella stories were originally printed one a weekly basis in Shukuu Sh?nen Magazine in 16-page increments that actually consisted of 15 story pages and one title page. Ten additional one-shot stories were presented in seasonal and holiday specials of Shuukuu Sh?nen