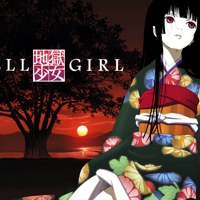 The story revolves around a supernatural system where, anyone with a powerful grudge may summon the Hell Girl, a mysterious entity that will exact her client’s revenge with the price of damning their own souls to hell after they die.

After torturing the cursed target by letting him/her relive inside her/his own cruelty and injustice, Hell Girl ferries the poor soul into Hell, where eternal pain and suffering awaits them.

Ai Enma
Ai Enma, also known as the Hell Girl, is the main protagonist of the series. She has long black hair, red eyes, pale skin, and is usually seen in a black school uniform. Ai is an enigmatic supernatural entity that shows little to no emotion, and lives with her grandmother in a realm that basks in eternal sunset. Inside their house is an old computer, from which she receives the requests of her client.

She lived in a peculiar village during her life as a mortal, where she was chosen to be buried alive, a living sacrifice as part of her village’s tradition. Her once deep brown eyes turned red after her childhood friend and cousin was forced to give the first shovel of soil during the ritual. Enma did not die, but rose out of her grave instead. Full of hatred and vengeance, she killed everyone and burned down her village.

Sometime later, a spider appears before the damned soul of Enma, and was revealed to be

Amazon
Anime Rating
8.5/10
1343 users added this.
Similar in these categories.