Fist of the North Star [Manga] 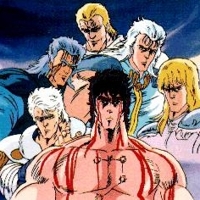 Near the end of the 20th century, a nuclear flame engulfed most of the Earth’s surface, reducing most of the world into a vast desert wasteland. The survivors of mankind banded together in tribes in order to fight over the few supply of uncontaminated food and water still left in the world, with the strong often preying on the weak. Kenshiro, the successor of the assassination art known as Hokuto Shinken, wanders the wasteland after being separated from his fiancee by a rival martial artist. Accompanied by two young children, Bat and Lin, Ken becomes a savior to the weak and innocent from the various gangs threatening their survival. Throughout the course of his journey, Kenshiro encounters various formidable rivals and adversaries, ultimately culminating with Kenshiro’s eldest adoptive brother Raoh, an oppressive tyrant who challenges Ken for the right of the Hokuto Shinken succession.