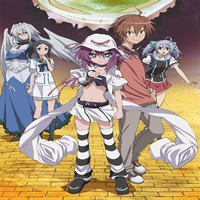 Yumeji Fujiwara, a young male student like any other, gained the power to see the aura of other people’s dreams, and is able to predict what kind of dream they will have the following night, after an event that occurred 10 years ago. Since then, he started to have weird dreams with cats following him for an unknown reason, where he learns thanks to the boss of the cat army, John Doe, that his body is needed to access the real world. One day, as he was about to come back home after his errands, a mysterious girl falls on top of him. This girl, called Merry Nightmare, is actually a dream demon, who’s searching for a way to come back in her world. As Yumeji decides to help her, the gate to the world of dreams opens again, this time in full daylight. She appears in the daydream world and wards off the Dream Demon “Chaser John Doe” looking for an answer to how to get back to her world. It seems as if John Doe knows something about Merry…