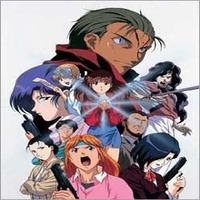 Momiji Fujimiya thought she was just an ordinary high school student. One day, she confronted on her way to school by a cat-eyed man with blue magatama beads embedded in his hands, who then attempts to kill her. Momiji is confused and terrified this strange man’s sudden desire to kill her, he also refers to her as Kushinada, confusing her even further. Momiji is saved by the sudden appearance of two government officials, one of whom shoots the man in the arm and sends him fleeing.

For thousands of years, the forces of the Aragami have been in check by a steady diet of human sacrifices, but now the bonds have been broken and mankind’s oldest and deadliest enemies are stirring. The story becomes increasingly complex with the appearance of Murakumo, a man with eight mitama who kills any Aragami he comes across for his own personal reasons. Kusanagi repeatedly attempts to kill Murakumo, Kaede Kunikida reappears along with a strange energy field in Tokyo, and Murakumo and Kaede’s plans soon become clear- they intend to resurrect the God Susanoo and purify the world of humanity’s influences, with Kaede acting as the leader of the movement.

Blue Seeds is a Japanese manga series written and illustrated by Yuzo Takada. The plot is based on the Izumo cycle of Japanese mythology and the tale of the God Susanoo and the eight-headed monster Yamata no Orochi. The main character, Momiji Fujimiya, is a descendant of the mythical Princess Kushinada. When Japan is menaced by Aragami “angry gods” spawned by Yamato-no-Orochi, Momiji is intended to be sacrificed to appease the Aragami. She instead, however, becomes the member of the Terrestrial Administration Center (TAC) a secret agency charged with fighting them.

Ashi Productions and Product I.G created an anime adaptation for broadcast on Japan’s TV Tokyo. The anime series ran for 26 episodes, originally airing from October 5, 1994, to March 29, 1995. An original video animation was released in three ep