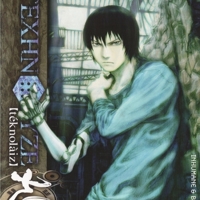 In the underground city of Lux, Ichise is a prize fighter. He angers his promoter, who cuts off his arm and leg. Doc, a former citizen of the sealed city of the Class, is Lux’s most talented researcher of Texhnolyze, an advanced prosthetic limb technology. She gives Ichise Texhnolyzed limbs without his consent. Texhnolyze uses Raffia, a substance derived from dead bodies that is harvested in mines around the city’s Obelisk. Raffia prevents the user’s body from rejecting the Texhnolyze.

Ran, the current Seer of Gabe, sells flowers in Lux. She can see an individual’s possible future. Her followers in Gabe unquestioningly accept her predictions even at the cost of their lives. Gabe is home to the former leaders of Lux, who were overthrown by the Organo. Onishi is the current leader of the Organo and is credited with the current peace in Lux.

Yoshii comes to Lux from the legendary surface. Fed up with the unchanging nature life on surface, Yoshii covertly throws Lux into chaos, pitting the Organo, the Salvation Union, and the Racan against each other. The tensions eventually escalate into a battle in the streets between the three factions. Afterward, Yoshii attempts to convince Shinji, leader of the Racan, to assassinate a Class leader. Onishi arrives to prevent the assassination, and Yoshii almost kills Onishi, but Ichise arrives and kills Yoshii.

Doc goes to the entrance of the Class enclave and attempts to convince their leader, Kano, to take her in and use her Texhnolyze expertise, presenting Ichise as an example that Texhnolyzation can create perfect humans. However, Kano has a different form of Texhnolyzation in mind, so he destroys Doc’s research and tries to kill her.

Kano undermines the three factions of Lux and creates an army of Shapes: humans whose entire bodies have been replaced with Texhnolyze, with only their heads remaining intact. The Shapes march on the city and many of Onishi’s remaining allies are killed.

Onishi sends Doc and Ichise to