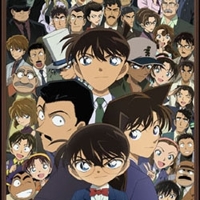 Detective Conan is about an elementary school boy named Conan Edogawa. He solves mysteries and crimes through reasoning, logic, the help of his friends and some nifty gadgets provided by Professor Agasa. But Conan is not really an elementary school boy: in reality he’s the famous 17-year-old high school detective Shinichi Kudo! While investigating some suspicious men in black, Shinichi was knocked down by one of them. During his semi-conscious state, an experimental drug was forced down his throat that was meant to kill him. Instead of dying, Shinichi shrunk into a little kid. In order to prevent the men in black who did this to him from hurting his friends and family, Shinichi changed his name to Conan Edogawa and lives now with his childhood friend, Ran and her dad, detective Kogoro Mori, without them knowing about his situation.