Has anyone else rewatched Neon Genesis Evangelion/Rebuild movies recently as they are stuck at home because everything else is closed? After watching all 4-ish hours of JumpTheShark video essays on Shinji + Asuka relationship (best girl, btw), and then I feelz (yes, I meant to write feelz) down a YouTube hole which compelled me to rewatch the whole series. Despite having watched the entire series and movies multiple times, I'm still learning a bunch of new things I've missed from the YT videos.

Since I've been sheltering at home (by myself and only having digital contact with friends) these past few days, I find myself relating more to the whole idea of isolation and loneliness. Since not all of my friends obsessed with the existential themes that plagued Evangelion as I am, and with the news of anime con's being canceled or postponed, I decided to turn to y'all.

TL;DR: If you love Evangelion as much as meeeeee(!), then what is your favorite scene from the series? What about the anime resonates with you the most? I don't know if anyone will answer my borderline destructive obsession for Hideaki Anno's masterpiece...but maybe someone out there, also, feelz the urge to talk about how this anime has fucked you up mentally?!?!?!.

Evangelion is one of my favorite series. I started playing the mobile game Valkyrie Connect just because they did an EVA crossover
My favorite scene is a tough choice. But I'll go with where Asuka wakes up from her not a coma but mental deterioration and battles the EVA-05. kinda wish it didn't have such a horrible outcome. My friends like to joke I get a new Asuka figure at every con I go to...
If you love EVA an artist named Jonathan Young has done a cover of Cruel Angel's Thesis it is up in Youtube

Yes, my first username for this site was Tabris. you know who Tabris is? The end of Evangelion was a masterpiece. Asuka mixed with that beautiful classical music was beautiful!

This guy's done some fantastic covers

Arc @arc commented on (Re)Watching the Evangelion Series During CoronaTime
Arc @arc
May 16, 20 at 10:43pm

wow, I've actually been showing my gf the series over the past month. She's never seen it before. What's the best place to see evangelion 2.0? I was wanting to stream it somewhere but I couldn't find anything. Is it DVD only? 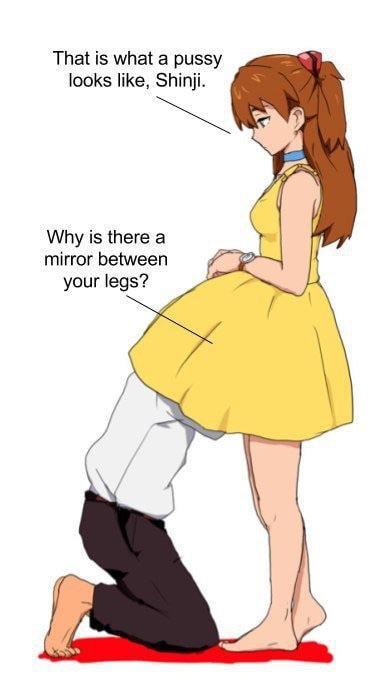 Arc @arc commented on (Re)Watching the Evangelion Series During CoronaTime
Arc @arc
May 16, 20 at 10:46pm

^this is my gf XD

Arc @arc commented on (Re)Watching the Evangelion Series During CoronaTime
Arc @arc
May 16, 20 at 10:47pm

I also want to post one of my favorite amvs back in the day of evangelion. I thought the editing was great and really conveyed the emotion in the series.

Ah, yes. The last angel. Shinji's brolove. Yeah, I think any scene with Asuka is a sad one. I recently forced my friends to watch the 2.0 movie with me and showed them that scene where Shinji rips her apart. True love right there. Best place...there is a decent version on YouTube but I just use kiss anime. And those memes!

I'm sad the last rebuild film is delayed cuz of the virus :(