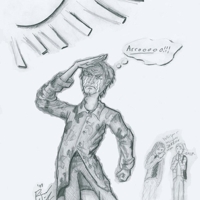 30 year old Male
Single
Likes: No Preferences
Last online over 10 years ago
TX
Activity
About
Pictures
More ▼
0
Friends 326
Anime 0
Cons 0
Awards
Been really into anime since '05, after my first A-kon, a convention out of Dallas, oldest anime convention in the U.S. in fact. The main reason I anime, is that fact that you can do anything with animation, and anime pretty regularly exercises that freedom. I enjoy manga because they're books with pictures. I occasionally pretend to have other interests besides anime and manga, almost all of them nerdy. Said other interests include, video games, I prefer console, but I do PC too, comics, from where ever, movies, music, 80s rock and/or pop and bib band mostly, pencil and paper RPGs, I really dig DnD and Shadowrun, football, only pro though, fantasy novels, light novels, visual novels, webcomics, podcasts, the internet in general, the occasional MAD/AMV, collecting gigs of fanart that I never, and probably will never, do anything with, and run-on sentences. The place I live, in the extreme likely you've never heard of it, is a suburb of Austin, the capital of Texas, for anyone who might not know. I've lived in Texas for mostly all my life, I was actually born in Richmond, Virgina, the capital of that state, but my parents moved after about three months. I lived in various places across Texas, from what I'm told, for about five years, until we settled in my dad's parent's old house in Garland, a suburb of Dallas, where I spent the better part of the last thirteen years. Currently I'm a hikikomori and I plan to go to collage next fall. I'm heavily sarcastic, and not unusually honest, no matter how brutal. It's not that I don't possess tact, I just rarely exercise it. I don't much care for stupidity, and I know how much of asshole that makes me sound like, but I don't think I have very unreasonable standards. I mean if you have the ability to sign up for this site you should possess the mental faculties to not be a dumbass, so exercise them. And just to make sure I alienate everyone who reads this, I feel that I'm one of the last of a dying breed, true, blue anime fans. The kind of fan who doesn't care if a show's old or new, or what what genre a show is, someone who just loves anime as a medium. Basically you posses no bias against any anime, though that doesn't mean you have to like everything. Also I hate being called a fanboy in a derogatory manner.