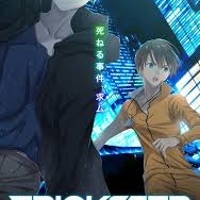 The story is set in 203X, and the Shounen Tanteidan (Boy Detectives Club) have been assembled under the mysterious detective Kogorou Akechi. Their actions have led to the resolution of various small and large incidents. One day, team member Kensuke Hanasaki meets a boy named Yoshio Kobayashi. Kobayashi, who has an undying body because of an “unidentifiable fog”, wishes his own death and refuses contact with others. Hanasaki takes an interest in Kobayashi and invites him to join the Boys’ Detective Team. The encounter eventually leads them to the connection between the criminal nicknamed “Fiend with Twenty Faces” (Kaijin Nijuu Mensou) and Kogorou Akechi.