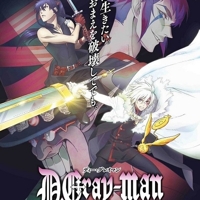 D.Gray-man Hallow is an anime series produced by TMS Entertainment. It is based on Katsura Hoshino’s manga series D.Gray-man. It acts as a sequel to the previous D.Gray-man anime series and follows a young Exorcist named Allen Walker from the Black Order which are in charge of destroying weapons, known as Akuma, using objects known as “Innocence”.1 The Akuma are created by an ancient sorcerer known as The Millenium Earl, who is allied with the immortal Noah Family.