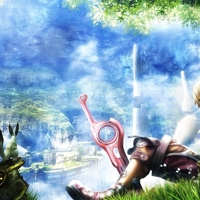 The setting of Xenoblade originated in a world that was nothing but endless ocean, until two great titans, the Bionis and the Mechonis, came into existence. The two giants fought a timeless battle, until with one final strike, only their lifeless bodies remained, forever locked in combat.15 Eons later, new forms of life arose on the corpses two titans; organic lifeforms such as the humanoid Homs on Bionis, and mechanical life forms, such as the machina, on Mechonis.16 Like the respective titans, the Homs of Bionis, and the mechon of Mechonis fight endlessly for their existence.15
The protagonist of the game is an 18-year-old young man named Shulk, who lives in Colony 9 of the Bionis. When the colony is attacked by the Mechon, he obtains the Monado, the legendary energy blade capable of severely damaging the Mechon, and leaves to stop the Mechon threat.17 Those who fight with him are Reyn, a young and headstrong Defense Force soldier; Fiora, Shulk and Reyn’s childhood friend; Dunban, the previous wielder of the Monado and Fiora’s older brother; Sharla, a medic and sniper from Colony 6; Melia, mage and crown princess of the High Entia; and Riki, a member of the Nopon race of small creatures, who is chosen as the hero of his village.