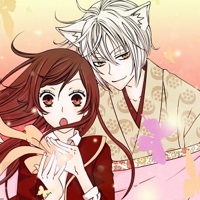 After Nanami’s father runs away due to gambling debts and she is evicted from her apartment, Nanami meets a strange man named Mikage, who is afraid of dogs. She saves Mikage from a dog and tells him her story. He gives Nanami his house as a thank you for saving him. She accepts the offer because she is homeless. When Nanami arrives at Mikage’s home, she is shocked to see that it is not a normal home but a shrine for worship. After that she is greeted by both Onikiri and Kotetsu who are the keepers of the shrine. She then meets Tomoe, Mikage’s familiar, and she learns that Mikage used to be the Earth deity of the shrine and has bestowed upon her his mark so that she may be the new Deity. At first Nanami is reluctant, but as she lives with Tomoe, Onikiri and Kotetsu she begins to understand and work hard in her new position as Earth Deity. As the story progresses Nanami finds herself falling in love with Tomoe, but he rejects her because the love between a human and a yokai is taboo. Despite saying that, Tomoe finds himself falling in love with her too.