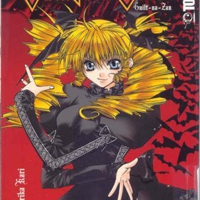 One hundred years ago the vampire aristocrat Guilt-Na-Zan was sealed in a cross by a powerful exorcist. In modern times he is released by Kyoji, a descendant of the original exorcist, but finds himself in the body of a wax doll shaped like a cute girl. Only when he sucks the blood of darling Tonae, Kyoji’s younger sister, can he transform back into his original self, and then only for a few minutes. He is otherwise subject to Kyoji’s whims, be it serving as a maid and cook or dressing up as a schoolgirl to track down a demon.
Only by drinking the blood of Tonae, Kyoji’s pure hearted younger sister, can he return to his true form. With the amount of blood he is allowed to take (1cc, a number set by Kyoji) he can only turn into his true form for about 5 minutes. However, after smelling a perfume created by Kyoji, made from Tonae’s blood, he can turn into his true form. However, the perfume has a delayed reaction, so he can never know when the transformation will happen, or what side effects can occur. One major side effect of the perfume is that, every full moon, Guilt-na-Zan changes back to his true form for that night, until the moon sets but he will only have the same powers as he does in the form of the doll only being able to create flowers and candy.
Guilt-na-Zan has to defeat evil entities of all sorts for Kyoji, who is too lazy to defeat them himself, as well as fend off Kyoji’s idiot twin brother Kyoichi (or, as he likes to be known, “Night Veil”). Kyoichi frees Vincent (a literal bat-man, or a bat who assumes human form) who happens to be Guilt-na’s best friend. When the two meet up, Vincent abandons Kyoichi and becomes Kyoji’s butler.