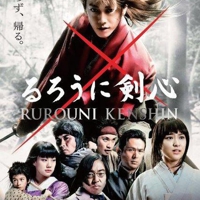 Hitokiri Batt?sai participates in the Battle of Toba-Fushimi and walks away from the battlefield as the victorious Imperialist forces celebrate. After a decade, he, now calling himself Himura Kenshin, arrives in Tokyo and meets Kamiya Kaoru, the owner of a fencing school left to her by her father. Kaouru’s only student is a boy named My?jin Yahiko. Kenshin soon moves in with them after stopping a group of thugs in the employ of Kanryu Takeda from taking over the dojo. Takani Megumi, who had escaped from Takeda after being forced to make opium, also joins the group. She provides medication for the victims of poisoning who come to the dojo for help after one of Takeda’s men puts rat poison in the community wells. Angry at Takeda, Megumi, attempts to kill him, but is prevented from doing so and held hostage. Kenshin and Sagara Sanosuke attack Takeda’s mansion, besting all his men. Saito Hajime then helps them subdue Takeda, who had armed himself with a gatling gun. They rescue Megumi, but discover that one of Takeda’s men, Jin-e Udo, has kidnapped Kaoru. Kenshin pursues Jin-e and a duel ensues, ending when Kenshin shatters Jin-e’s elbow with his scabbard. Jin-e then commits suicide. Kenshin takes the unconscious Kaoru back to the dojo, where upon waking up, she tells Kenshin that the dojo is now his home.