When They Cry [TV] 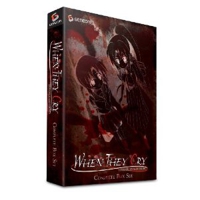 Higurashi When They Cry (????? Higurashi no Naku Koro ni?, lit. When the Cicadas Cry), known simply as When They Cry for the North American release of the anime adaptation, is a Japanese murder mystery d?jin soft sound novel series produced by 07th Expansion. The games are built on the NScripter game engine and are playable on Microsoft Windows PCs. The first game in the series, Onikakushi-hen, was released on August 10, 2002, and the eighth and final game in the original PC series, Matsuribayashi-hen, was released on August 13, 2006. While the first four games carried the overall title Higurashi no Naku Koro ni, the next four games were produced under the title Higurashi no Naku Koro ni Kai. A bonus fan disc called Higurashi no Naku Koro ni Rei was released on December 31, 2006. In addition to the original series, new story arcs were created in manga form and in video games for the PlayStation 2 and Nintendo DS in order to expand upon the story. The original eight PC releases were released in English by MangaGamer with the first four games on December 15, 2009, followed by the last four being released monthly starting with Meakashi-hen on February 28, 2010. The series is focused on a group of young friends and the strange events that occur in the rural village Hinamizawa where they reside.