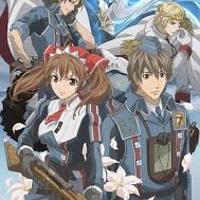 This anime is based of a video game series. This story is about Welkin Gunther a nature lover from a town of Bruhl who when his home nation of Gallia is invaded by the empire joins the militia along with his sister Isara who was adopted by Welkin’s father after her dad had died and another girl form their town Alicia who was part of the town watch. Welkin is put in charge of squad 7 as the tank commander and leads his troops against the empire. There are 2 main nations: the empire and the federation. Gallian is a nation on the border of these two and whose land is rich with ragnite which powers almost everything. Also a race of people known as the Darcens are shunned by everyone because of being blames for a major indecent of long ago past, Isara is one of these Darcens. Lastly there is a legendary group known as the Valkiria who have unimaginable power.