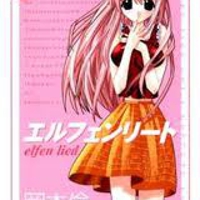 The Diclonius (two-horned human) are mutants created by humans. It has a special ability that can be described as a sixth sense. These mutants have enough power to exterminate the whole human race. Afraid of their powers, people isolate them in research labs to be studied.

One Diclonius girl, Lucy, breaks out of confinement, kills her guards and escapes. She falls into the ocean after being shot and ends up on a beach. There, she meets Kota and Yuka. They name her Nyu and begin to live with her.