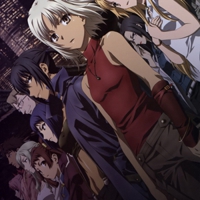 Canaan is a 13-episode anime television series, conceptualized by Type-Moon co-founders Kinoko Nasu and Takashi Takeuchi, based on the scenario that they created for the Nintendo Wii visual novel 428: F?sa Sareta Shibuya de, which is noted for being one of the few games to be have been awarded a perfect score by games publication Famitsu

A sequel to the 428: F?sa Sareta Shibuya de game, it centers on three women and how they are connected together to an upcoming anti-terrorism summit in Shanghai, China. One of them is Canaan, a Middle Eastern assassin and mercenary. Another is Alphard, Canaan’s rival and also a skilled assassin and mercenary while heading a terrorist organization called the Snakes. The final girl is Maria ?sawa, a victim of an attempted terrorist attack in the streets of Shibuya two years ago. Their encounters lead to armed interventions between Canaan and Alphard with a deep and tragic history in common.

The Canaan series has spawned a 13-episode anime TV show with a manga and light novel print series. As of September 30, 2010, the Anime Network has the anime online for North America.

Copy and Paste from Wikipedia