Origin ~Spirits of the Past~ [Movie] 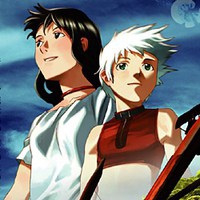 A boy named Agito stumbles upon a machine which has been keeping a girl named Toola in suspended animation for 300 years. Toola awakens to discover that the earth’s environment has been radically altered due to genetic experiments that her father was involved in, and that the forest itself has become a sentient entity. Together with Shunack, another person from the past, Toola attempts to use long dormant technology to return things to the way they used to be. When Toola comes to the realization that the ways of the past should not be revived, she and Agito fight to protect the world as it has become, and try to create a balance between mankind and nature.
A young boy named Agito enters a forbidden sanctuary where a glowing machine resides, which preserves this young girl named Toola, who has a mission entrusted by her from the past. 300 years into the future, the Earth’s enviorment has been ruined by the interference of mankind, and inbetween the 300 years, the past humans were forced into deep sleep. The Earth reaches a point where the mankind must survive, dividing people from “The Forest” in which the the forest tries to live together in peace.