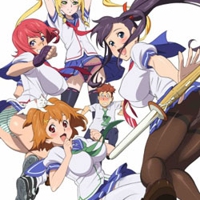 The series centres around Ooyama Takeru, a young normal yet perverted minded guy, who enrolls into Tenbi Gakuen, which was once an all-girls school now turned into a co-ed school. Unbeknownst to him, the only students admitted are those who are able to control a source of energy found in all living things called Element, and furthermore can use magical artifacts called Maken, which give the users specific and varied abilities. On the first day, he meets again after three years, Amaya Haruko, his childhood friend, Kushiya Inaho, a weird big busted girl who declares she’s his fiance, and Himegami Kodama, a blonde oujo who wants to kill him. After a whim by the school principle Rokujou Minori, he and the three girls end up living in the same room. Furthermore, after being persuaded by Haruko, Takeru decides to join the Maken-ki, a special force unit under the school student council, whose responsibility is to mediate duels between students in the school. However, he later finds out that no Maken is acceptable for him. How will his life continue in this school, where the students get into duels that showcase their magic and combat power, which he seemingly does not have.