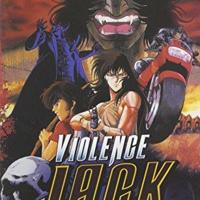 From Wiki:
“The series takes place in a world destroyed by a devastating earthquake in which the remnants of humanity are divided between the strong and the weak. Violence Jack is uncovered amongst the rubble and demolished granite by the inhabitants of this city, asking him to help the weak people and helping them destroy what, in most cases, are the strong groups commanded by killers and rapists (this is the story line of Violence Jack: Evil Town). In the three OVAs, Jack is requested to help different groups, such as the Zone A, (later he ends up helping Zone C women) or a small town, as shown in “Hell’s Wind”. As for the manga, the stories change drastically, being the first story the help of Violence Jack to a group of female models in a tropical forest in Kanto. Even though Jack contains the figure of a ruthless, evil character, he always helps the weak section of people, in trade for nothing."