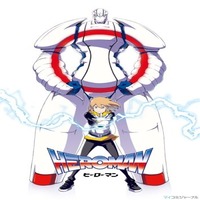 Orphaned American boy Joey lives with his grandmother, working at a restaurant in the West Coast city of Center City, while going to school. Upon hearing of a new toy robot called the Heybo, Joey believes that getting one will make his life better, turning him into a hero to protect his friends and family. However, he cannot afford to buy it on his meager salary. His luck changes when he picks up a broken down Heybo abandoned by a school bully. He tries to fix it, naming it Heroman, but does not have any luck in getting it to work. However, when it gets struck by a bolt of lightning, it transforms into a giant robot, just in time to save his friend Lina from impending danger. Now, Joey and Heroman are Earth’s only defense against the evil insectoid Skrugg aliens, unknowingly summoned to Earth by Joey’s science teacher.