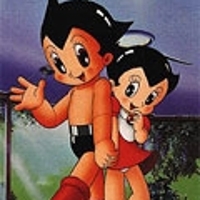 Astro Boy was created by Doctor Boyton when his son Toby died in a car accident. Astro is an exact match for Toby. And was origionally called Toby by his “father”.

When Astro was first built, Doctor Boyton wanted to keep him a secret. But people eventually found about him and he became a hero.

Astro was seperated from his father during a cruise. Astro saved the ship from some ice burgs, when he returned, his father had disappeared. Astro was tricked into signing himself over to a robot circus. It was in the robot circus that he met Kathy, who gave Astro his name; Astro Boy.

After the Robot Circus, Astro was taken back to Japan by Doctor Elefan, a scientist who had recently been apointed head of the Ministry of Science.

Astro went to school and eventually, Doctor Elefan built parents for Astro. Astro now lives with them and his dog, Jump.

Later, Doctor Elefan built a sister for Astro and called her Uran. Uran is a very mischevious girl and often gets herself and Astro into a lot of trouble.