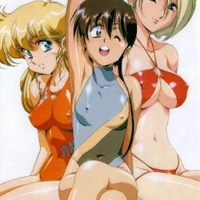 Plastic Little has it all, from epic undersea battles and entire cities collapsing, to a ruthless villain to end all villains and the roughest, toughest, tomboy heroine to ever strut her stuff in a spandex wet-suit!

Plastic Little is set on the breathtakingly beautiful planet Yietta, which supports a thriving metropolis of colonists who make their living by exploiting tourists and by exporting the planet’s unique resources to the omnipresent Galactic Federation.

As our story begins, the citizens of Yietta are finally about to pay off their debts to the Federation and become an independent colony. Unfortunately, there are those who would rather not let control of the planet slip through their fingers, especially when there are military projects which exploit Yietta’s resources…