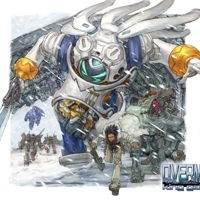 In the distant future, mankind is forced to live in dome-covered cities called Domepolis after an environmental cataclysm. These cities are maintained and supplied by private corporations, but at what cost to the inhabitants living within them? In a Siberian Domeplolis, virtual game champion Gainer Sanga is arrested on suspicion of Exodus, and unouthorized venture beyond the dome walls and strictly prohibited by the government. In prison, he meets Gain Bijou, a mercenary bent on escaping and together the two will steal a mysterious Overman out of Duke Medaiyu’s mansion. Fighting back the Siberian Railway Patrol forces, they both lead a massive Exodus out of the city to the east land Yapan, where their ancestors are originally from.