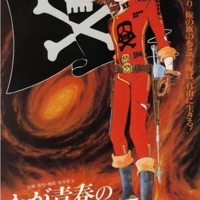 When aliens conquer earth and enslave the human race, all hope for freedom is abandoned. But one man will not give up. Captain Harlock, a brave space pilot, leads the resistance and vows to oust the aliens and restore freedom to his planet.

Harlock and his rebel band adopt the fighting strategy of ancient marauders and become known as the Space Pirates… with a skull and crossbones on their atomic powered spaceship! But the revolution is not without a price and The Space Pirate must make a difficult choice.