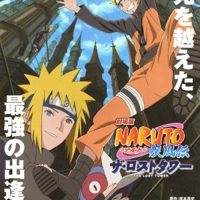 Yamato, Naruto Uzumaki, Sakura Haruno, and Sai are assigned on a mission to capture Mukade, a missing-nin. They all have chakra-knives, which are uniquely-designed trench knives that allow a ninja to infuse their chakra with it to produce an added effect. They set out for the once glorious historic ruins of Rouran, a city with one thousand towers and is located in the middle of the desert. They pursue and corner the missing-nin. Mukade’s goal is revealed to travel to the past and take over the Five Great Shinobi Countries with the power of the Ry?myaku, an ancient chakra flow deep underground Rouran. He unleashes the power of the Ry?myaku, which is seen to have been sealed by Minato Namikaze, Naruto’s long-deceased father (who was well known as Konoha’s Fourth Hokage)’s hirashin kunai, causing a light to envelop Naruto and Yamato, who was trying to stop Mukade. Sai stops Sakura from getting sucked in by the Ry?myaku by grabbing her onto his ink bird and flies to safety, leaving Naruto and Yamato in the mysterious light. Naruto and Yamato are sent twenty years into the past. When Naruto awakens from this time slip, he meets the queen of Rouran, S?ra.

It’s later revealed that Mukade traveled to the past 6 years before Naruto did. By this point he has changed his name to Anrokuzan and serves as the minister of Rouran. He has killed S?ra’s mother S?ramu, the previous queen, and is now attempting to kill S?ra and take over the world. Naruto tells S?ra that he will protect her. Anrokuzan appears to have slaves – who are citizens of Rouran – who do his dirty work. With the Ry?myaku, Anrokuzan is able to create the “Puppet Ninja Forces”, which can attack using the Ry?myaku’s chakra, and are able to use weapons such as kunai and deflect attacks. (Naruto is seen using his chakra-knife to attack them.)

Minato Namikaze is now seen at Konoha, and Jiraiya shows Minato that he has completed the Rasengan. Then the young Shizune, Maito Gai, Asuma Sarutobi, and Kakashi Hatake