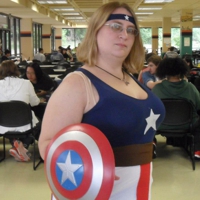 No worries, I've had a lot going on myself. There was just a death in my family and everything that goes along with it. Lots of craziness.

You were laid off? That's never fun, sorry to hear that. I hope you're holding up alright and have other job prospects.

Your list of anime is impressive. Hat's off, madame.

It seems to be fine now. My sister's husband confronted the guy and told him not to come back. Turns out it was a homeless guy prowling around. Not a usual thing in a rural area like that.

Wow. It seems like everything is getting more and more expensive these days... And for most, wages aren't really going up to make up for it. It's going to be interesting at some point in the future.

My sister and family are going through a bit of a scary and bizarre time over the past week. I've been staying at her house overnight, and have gone all out securing her home with motion alarms and other measures. I hope we catch the guy...

The funny thing is that I just had to help some people load up the moving truck for their big move, and it took the entire day. It was a lot of work, so I guess you could say that was a double whammy. It is a good way to help transition to the post-con life, though. :)

Nice, I was always interested in hearing what those cons are like. I wanted to go to Anime Boston once at one point (Since I was in the area that time), but sadly it didn't work out. Maybe someday.

Sakura Con is the biggest in my region, and it's close to the same size as Anime Boston. The other cons in my region are Kumori Con (It's for Portland, OR but actually in a suburb in WA. Heh.), and there's Anime Evolution in Vancouver, BC... There's also some very small cons sprinkled in some other smaller cities, but I don't know much about those. I have a friend that goes to these four cons every year: Anime Expo, Fanime, Kumori Con, and Sakura Con. I wish I could do that! I do have family near LA, so perhaps finding a way to go to Anime Expo could be possible. It's the biggest anime con in North America as far as I know, and it sounds like it offers a lot of cool stuff.

It's going to take a couple days to recover and catch up on sleep, that's for sure.

I see what you mean there. I decided to go easy on spending this year because I'm planning on also going to Kumori Con, down in the Portland area in August. It's a 4-day con, which will be neat, and it's only two days after my Birthday. And It'll be my first time going to a con that's not Sakura Con. Really looking forward to it.

Just now got back from Sakura Con. I had a great time!

Elisa was great, the Q/A with the SAO director was entertaining, spent a lot of time with new friends and old, and I brought along my 3DS for street-passing (Which was surprisingly a lot of fun). I also got some cool merch at the dealers hall like I do every year. And here's a cool factoid: Matthew Mercer (One of my favorite voice actors) was there and was the DM and narrator of some D&D games. It was another fun year.

I only wish there wasn't the lack of premieres, but the last few years raised the bar pretty high for me.

Oh no I hope you're alright

Hey how's your sewing coming along?