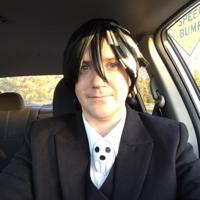 Male
Last online 22 days ago
VA
Activity
About
Pictures
The name is Gabriel!

Been a long time Anime fan since the 90's. Grew up watching Yu Yu Hakusho, Dragon Ball, FLCL, Gundam, Ghost In The Shell, Appleseed, and Wolf's Rain. That expanded later into other fandoms such as Durarara!!, Soul Eater, Blood Lad!, JoJo's Bizarre Adventure, Devil Is A Part-Timer, Welcome To Demon School! Iruma-kun, Mob Psycho 100 and Re:Zero.

I'm open to watching a variety of genres from horror, romance, action, adventure, and most of all comedy!

My other interest are going for walks at local parks, traveling around the country, and watching movies.

Other information about my life...

I have a house. I live alone. Work 40-60 hours a week at a warehouse. Both parents are alive and live in the same state of Virginia as me. My eldest sibling is a brother who's 45 and a sister that's 32 with an 11 year-old son.

Any further questions I defer to my secretary to answer, haha!
7 Friends 155 Anime 3 Awards
Favorite Anime