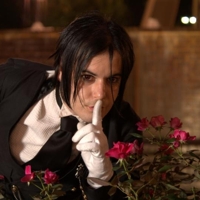 35 year old Male
Single
Last online over 4 years ago
IA
Activity
About
Pictures
More ▼
9
Friends 99
Anime 1
Cons 0
Awards
Hi
Well, i should start off by saying that my name is Benjamin; but
beyond that...what do I say to give people an idea of who I am? I'm
a big geek, I love anime, video games, musicals, baking
goodies, making costumes, all that fun stuff. Generally I'm pretty
laid back, friendly to the point of being bubbly sometimes. I'm
usually high energy, love to go out for a good bike ride or hit the
streets rollerblading. I can be a bit too caring for my own good,
the whole "heart on my sleeve" bit. I may not smile a lot in my
pictures, but in person I usually don't stop. I love to make other
people laugh and smile, and from what I'm told I'm typically good
at doing so. I'm somewhat of a cuddlebug, I very much enjoy giving
and getting hugs and snuggles.

As for my beliefs, I'm more agnostic than anything else. I moved
around a lot as a young child and spent a lot of time around a lot
of different cultures and noticed that there are so many parallels
between just about every faith that it all has to stem from a
single source somewhere, just the interpretations have varied over
the years. So yes, I believe that there is something more out
there, some form of higher power that guides the evolution and life
and watches out for us, but for me there isn't enough evidence and
I'm not presumptuous enough to label it as God, Allah, Yahweh,
whatever name you choose to attribute to it. I just believe.

In terms of my musical interests, I like classic rock, alternative,
dance music, celtic, show tunes, classical and J-pop (which is
funny to do when driving around town with the windows down and the
speakers up.) I also like to sing; I was in a university choir for
the past 4 years and I loved it. I've performed in a few musicals,
my college seemed to love Rodgers and Hammerstein, so that's about
all we did. The Sound of Music, The King and I, and Cinderella.
They were so much fun and I'd love to try and get into local
theater if I can find something around here.

I like to dance, although I have no natural rhythm. I love DDR,
I can only play this because I have what I like to call
"pseudo-rhythm." If anyone were willing to teach me how to dance in
any other fashion, I would be more than willing to learn. I've been
taking ballroom and latin dance lessons lately to try and develop a
little style.

I'm a pretty avid video game and anime fan. I've been playing games
since I got the NES back when I was 2. I loved it. Now it's rare
for me to be somewhere without my psp or ds on me. As for anime,
I've been a fan of anime since 1993; the show that really got me
into it was a short little series called Ambassador Magma. Horrible
voice acting, so so animation, but the story line was so different
from other cartoons that it just captivated me and I've been in
love ever since. Now a days I try and keep up with newer shows and
I love to make my own costumes and cosplay at conventions. So far
I've cosplayed as Tenchi (Tenchi Muyo), Miroku (Inuyasha), and
Yamada Hanatarou (Bleach). My next big project is Zach Fair (Crisis
Core), wish me luck.

Most people who know me describe as the big brother type of guy,
which is totally cool with me. I'm usually the on my friends come
to when they have a problem or just need that shoulder to cry on. I
like to help other people if it is within my power to do so.

That and if I had a nickel for every time I've been called "sweet"
I could probably have paid off my student loans by now.

As for my pics, i keep them in order from most recent to oldest, so
you can see how much father time is kicking my ass. lol

Not sure what else I can say right now to give ya a better idea of
who I am. If you want to talk, just drop me a line anytime and I'll
get back with you as soon as I can. I'd love to make some new
friends.

Take care and thanks for taking the time to read my profile (if you
did that is...)