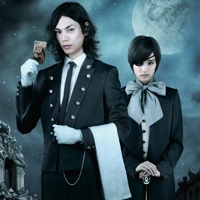 The film is set in a parallel, quasi-Edwardian history. The world contains two major powers: the West, ruled by the Queen, and the East. The Queen manipulates events worldwide using operatives called the Queen’s Watchdogs. The film’s protagonist, Earl Kiyohara Genpu (replacing Ciel Phantomhive from the anime), is a Queen’s Watchdog in an unnamed Eastern metropolis.A large automobile careers through a docks area. The man driving is rapidly dessicating, his face wrinkling, its skin crumbling. As he dies, the car crashes to a halt.A warehouse echoes with screams as dark-clad men herd young women around. The chief thug questions one young woman for carrying photos of desiccated bodies. A young man in a formal black butler’s uniform suddenly appears in the warehouse, identifying himself as a servant of the Genpu family. The thugs attack. Most are disabled or killed quickly. Only the chief thug remains conscious for questioning.