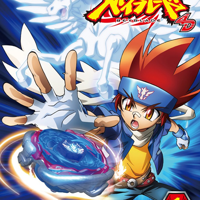 Beyblade: Metal Fusion is the first season of the Metal Saga. The series stars Gingka Hagane, a talented blader traveling all around Japan to get stronger so he can defeat the Dark Nebula, an evil organization who is also responsible for the death of Gingka’s father Ryo Hagane. Gingka aims to recover the forbidden bey, Lightning L-Drago, which has been stolen by the Dark Nebula to use its powers to fulfill their wicked ambitions. Along with his bey, Storm Pegasus, Gingka must face and defeat many foes. Gingka’s second biggest rival is Kyoya Tategami, formerly head of a bad blader group, called the Face Hunters. Kyoya’s goal is to defeat Gingka. Gingka is the blader who believes that every blader has a blader’s spirit in him/her. The Dark Nebula recruits a blader named Ryuga, who is given the Lightning L-Drago. He travels around the world, defeating and either recruiting or destroying the beyblades of other bladers. Gingka battles Ryuga many times but is always defeated. His friends are also defeated, including Kyoya. There is a tournament that the Dark Nebula has organized called Battle Bladers, and Ryuga hopes to battle Gingka in the final match. Gingka wins the match with help from his friends, Madoka, Kenta, Benkei, Hyoma, and Hikaru, along with support from his enemies, Kyoya and Phoenix, a masked, mysterious blader that appears at the best times, often saving Gingka, his friends, and his rivals. In a fierce battle with Doji, the head of the Dark Nebula, Phoenix saves Hyoma and Kenta. After Gingka arrives, the ceiling begins to collapse, and a broken piece breaks Phoenix’s mask, revealing that Phoenix is Ryo, Gingka’s father. Ryo explains how Storm Pegasus and the Lightning L-Drago came into existence. After this event it is Kyoya vs Ryuga, in which Kyoya starts off great but once the spirits of L-Drago enter Ryuga’s body he cannot hold his ground. Ryuga then explains that it is Gingka’s fault that everyone of his friends have been absorbed by the vicious L-Drago