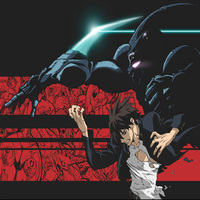 A world controlled by a sinister brotherhood who hide their fangs behind masks of humanity, known as the Chronos Corporation. While investigating a mysterious explosion near his school, Sho Fukamachi happens upon the Chronos Corporation’s Greatest weapon: a techno organic suit of bio armor known as “the Guyver.” But Chronos is determined to conceal their secrets at any cost. Sho soon finds himself relentlessly pursued by its army of horrific bio monsters. With nowhere to run, Sho is forced to call upon the fearsome power of the Guyver and rip his opponents limb from limb in a desperate struggle for survival.

Episode 1: “The Amazing Bioboosted Armor”
A group of mysterious men killed two officers and is actually Zoanoids made by the Chronos Organization. The three stole Guyver Units from the organization and is being pursued. Malmot a Zoanoid had an encounter with the Chronos Organization, after the encounter the units got scattered through the area, Sho and Tetsuro found one and Sho activated it becoming Guyver I.

Episode 2: “Secret Organization Cronos”
Tetsuro got suspected to know where the Guyver is. Chronos sent two Zoanoids disguised as Police officers to interrogate Tetsuro but Sho followed them. Sho uses the Guyver and fought the Zoanoids. Vamore appears in front of Sho with two laser turrets on his shoulder. But Sho manages to shatter it by the Guyver’s Mega-Smasher. Lisker a Chronos officer got merge with another Guyver.

Episode 3: “Inspector Lisker”
Sho being chased by the Chronos organization got intercepted by other troops again. Sho uses the Guyver unit and defeated them easily. But another Zoanoid reveals his face named Synevite. He gave Sho a hard time but