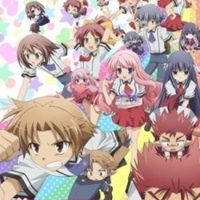 Continuing from where Season 1 left, the story continues with a more in depth into the characters but with the same humor narrative as before. Goofball Yoshii is still leading his crew in Avatar battles against the smarter and brainer students in school, but the girls in Class F have grown far less concerned with improving their status on campus. Instead of moving up in the world, the girls are more interested in getting closer to the guys in the gang!

Of course, some of the boys are totally oblivious to the romantic intentions of their female friends. That’s to be expected in a group of dim-wits and misfits. Nonetheless, the femmes of Class F aren’t giving up anytime soon. Because when love is on the line, even the biggest underachievers can find motivation – even if they can’t spell it!

Amazon
Anime Rating
8.4/10
620 users added this.
Similar in these categories.