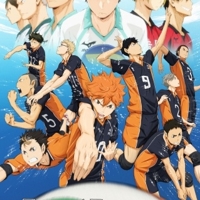 After witnessing the “Little Giant” of Karasuno play in a national championships volleyball match, young Hinata Shoyo instantly gets inspired and decides to revive his school’s volleyball club. Although managing to force some of his friends to join his team and even participate in a tournament against other schools, Hinata’s inexperienced team terribly loses their first game against the prodigal “King of the Court” Tobio Kageyama. Instead of losing interest, Hinata’s thirst for the game only grew, and he vows to someday defeat Kageyama in court. Following his idol’s footsteps, he enrolls in Karasuno High School to join its volleyball club even though it has already lost its popularity. Much to his surprise, he finds his rival Kageyama is also in Karasuno, and that they are now teammates.

Despite his amazing athleticism, Hinata still finds himself in a great disadvantage due to his short height. The heated rivals soon develop into an effective duo, as Hinata is the only one in the team fast enough to keep up with the plays set by Kageyama. With their newly found weapon, Karasuno sets out in their journey to become the strongest volleyball team, and once again raise the fallen flag of Karasuno High School.

Haikyu!! is a sport anime adaptation of the manga series under the same name, written and illustrated by Haruichi Furudate. Produced by Production I.G., the show aired a total of 60 episodes (divided into 3 seasons), starting from April 6, 2014 and ending in December 10, 2016. Its first, second, and third manga volume were ranked 22nd, 18th, and 18th in the Tohan Charts, respectively. The manga series also sold over 2 million copies just a year after its serialization.

The series has an entertaining set of characters and teams. From less talented but persistent players to arrogant prodigies, it offers intense action packed matches and inspiring displays of sportsmanship and teamwork. The following will

Amazon
Anime Rating
9.2/10
1666 users added this.
Similar in these categories.