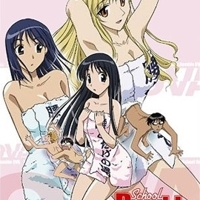 New faces and old faves pepper this random assortment of odds and ends a behind-the-scenes peek at the first season of School Rumble! And you simply won’t believe the absurd antics that got left out the first time around… (Though crazy does seem to be the theme of this show!)It’s a dog eat dog world as Yoshidayama takes on Harima and lil sis Yakumo discovers she’s not the only one who’s barking mad! Poor Imadori just might have met his match… Looks like he’s about to find out that Lara’s bark is no where near as bad as her bite!There’s even a history lesson as Class 2-C goes Neanderthal…