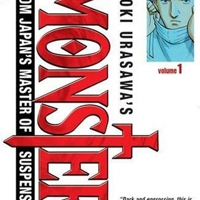 Dr. Kenz? Tenma is a young Japanese doctor, working at Eisler Memorial Hospital in Düsseldorf in 1986. An accomplished brain surgeon, he seems to have everything: a promotion in the offing; the favor of the hospital’s director, Heinemann; and Heinemann’s daughter Eva as his fiancée. However, Tenma is increasingly dissatisfied with the political bias of the hospital in treating patients, and seizes the chance to change things after a massacre brings twins Johan and Anna Liebert into the hospital. Johan has a gunshot wound to his head, and Anna mutters about killing; Tenma decides to operate on Johan instead of the mayor of Düsseldorf, who arrived later. Johan is saved, but Mayor Roedecker dies; Tenma loses his social standing (and Eva) as a result. However, Director Heinemann and the other doctors in Tenma’s way are mysteriously murdered, and both children disappear from the hospital soon afterwards. The police suspect Tenma, since he benefits from the turn of events; however, they have no evidence and can only question him.

Nine years later, Tenma is Chief of Surgery at Eisler Memorial. After saving a criminal named Adolf Junkers after Junkers was hit by a car, he hears Junkers muttering about a “monster”. Tenma is kind to Junkers, who reciprocates by opening up to the doctor. One evening, when Tenma returns with a clock as a gift for Junkers, he finds the guard in front of Junkers’ room dead and Junkers gone. Following the trail to the construction site of a half-finished building near the hospital, Tenma finds Junkers held at gunpoint. Concerned for Tenma’s safety, Junkers warns him against coming closer and pleads with him to run away. Tenma refuses, and the man holding the gun is revealed to be Johan Liebert, the boy whose life Tenma saved nine years earlier. Despite Tenma’s attempts to reason with him Johan shoots Junkers; telling Tenma he could never kill the man who saved his life, he walks off into the night, with Tenma too shocked to stop him.