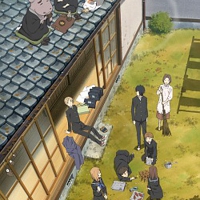 Takashi Natsume continues to return the names of the spirits that have been written in the “Book of Friends” he inherited from his grandmother, Reiko Natsume. While Natsume is still aided by the chubby Nyanko-sensei, he’s now helped by some of the friends he had made in his journey; be it human beings or spirits. As he becomes closer to both, Natsume faces the inevitable question of the sides he has to take especially when there is a conflict between the two.