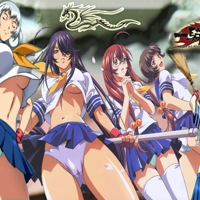 Seven schools are constantly “at war” with each other, and the students within—both male and female—have become skilled fighters and constantly battle with rival schools. Their lives and fates are guided by strange jewels that contain the spirits and destinies of warriors from the Sangokushi period. One girl, Sonsaku Hakufu, has recently moved to Japan and is apparently destined to unite the schools as her counterpart united seven countries long ago. But, like all heroes, there is a darker side to her fate, and as always there is a constant struggle by those around her to break the chains of their own destinies and make their own lives.