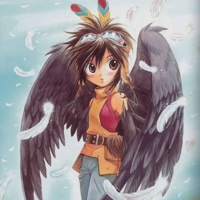 The plot revolves around four +Anima children: Cooro, Husky, Senri, and Nana. Brought together by their +Anima powers, they search for others like themselves and a place to belong. Along the way, they encounter villains and friends alike, as well as other +Anima.
In the +Anima fantasy world, Astaria (a primarily desert land with European influence), some humans have an unusual gift that grants them the ability to morph one or more of their body parts, such as limbs, into a form of an animal’s body part. Some are capable of even more radical changes, such as growing wings or full-body transformation. The transformation processes are very fast, and occur at the user’s will. When inactive, the morphed areas revert back to normal, leaving the person’s clothing and body completely untouched. The only visual mark of this ability appears on the body of the person, in the form of a black birthmark ( tattoo-like marking that determines their +anima). Occasionally, the user bears some behavioral characteristics of their animal, but this is not very common. +Anima are not treated kindly by the “normal” humans. Therefore, when some are treated bad enough or have a taken over neglected feeling, their anima often takes over them.