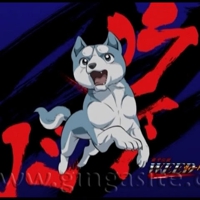 source: http://en.wikipedia.org/wiki/Ginga_Densetsu_Weed Ginga Densetsu Weed (Silver Fang Legend Weed as english translation) is a Japanese series, a sequel to Ginga Nagareboshi Gin, and focuses on a young pup named Weed, who is son of the great bearhound Gin. The year is 2000, and 14 years have passed7 since Gin the young and brave Akita and his followers defeated the giant bear Akakabuto and reconquered the Ohu mountains. The Twin Pass has recovered since, and the dogs have got the regions for themselves, living in peace, with the aged Gin as their leader. Suddenly, a new terror start to overhang the Ohu mountains, as a monstrous mutant dog, “Kaibutsu”, appears in the territory and transforms it to a nightmare, while the leader Gin is out on a journey with his closest copmates. Some months after Kaibutsu’s entry in the Twin Pass, a son to Gin, named “Weed” is born. He starts out as a lonely pup desperate to find his mother food while she suffers from induced starvation. He meets with an English Setter named GB and pleads for a dead bird that GB caught because his mother is terribly sick. Feeling bad for the pup, GB gives him the bird. Later, Weed loses his mother and a dog named Smith promises to take Weed to Ohu and let him meet his father. After he arrives in Ohu, Weed gives salvation to Ohu Mountains by killing Kaibustsu, and becomes the new leader until his father returns. However, a message is passed through that Weed’s father is being held captive in the Southern Alps where the bloodthirsty cannibal (as revealed after his brother,Genba,died) Hougen has his territory. Now, Weed must leave Ohu, to save his father and throw down the evil Hougen.