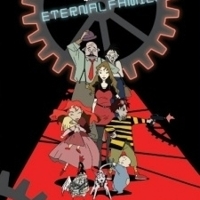 It started as a sociological experiment. 6 different people were brainwashed to think that they were a family and then put in arbitrary situations to see how they would react. However, when a taping of the families conducts is sold in a desperate attempt to make a little capital it instantly becomes a success. Now the family is a first rated show and their every move is broadcasted around the world without them knowing it. But when a clogged toilet sets off a chain of events that ultimately frees the family from the room they are confined in the broadcasters, not willing to lose their source of income, set out to hunt down and recapture every member of the Eternal family.